Hey guys, I'm Nikola, and I am a challenger elo booster. I am well known for my Hecarim, claiming rank 1 with the champion and getting 80% win rate accounts to challenger playing solo.

I started playing this champion since in season 6 as my main for my secondary role, and now in season 9, due to top lane having little impact, I switched to one tricking him in the jungle.

Hecarim and why he's good for boosting

Hecarim is a strong soloq pick if you can get the snowball going.

He struggles vs. invades (I will talk about this later), and he has serious mana issues. His most significant counters right now are Kha'Zix, Shaco, and Lee Sin due to them being such strong early game invade junglers that can set you far behind early easily.

I usually full clear, Red to Krugs to Raptors to Wolves to Blue and Gromp, starting Talisman and Refillable. After clearing your red side jungle, you should gain level 3, and from there, you can look to gank mid/sidelane by leveling up your E. If you can't find a gank, level up Q again instead and continue clearing your blue side jungle. Your clear should be done around 3:22 at most, and then you should look to charge into the nearest Scuttle Crab immediately, either that or look for a gank. If none of these is an option, you have about 20-25 seconds to search the enemy jungle to see if there are any camps left or put up some deep wards there. You can also look for counter ganks.

After you're done, you should recall and look to buy Sheen (you can wait for it if you need gold) and run to the Krugs immediately since they spawn at around 4:27. This will maximize your XP gain since Krugs give the most, and you should look for ganks/counterganks with Ghost.

Your most significant weaknesses are early invades, if you go for the standard full clear and the enemy jungler invades blue, you are vulnerable because you use a lot of mana. If you win the smite battle at blue, you should win the fight 100% due to conqueror and your W being very strong. This doesn't count if the enemy jungler has ignite (like Shaco), which makes you not heal as much and lose the fight.

Regarding gameplay- Hecarim is very straightforward but has some nice mechanical stuff he can pull off.

First, if you have your Q fully stacked and enough mana, you should win every 1v1 against the enemy jungler, but before taking a duel, you should consider the position of your laners and decide whether you can kill him before he gets help. The only jungler that can 1v1 you with fully stacked Q is Olaf, and that's if only he hits every Q. Your Q outranges most melee champions auto attacks, so if you have your ghost or e on, you can look to kite them around hitting your q and them, not auto-attacking. This is an essential part that you will need to master.

With your ultimate, you should always use it behind the enemy because when enemies are feared they run away from the direction of the fear, making them go back towards your team/base, and you should use W in skirmishes at the point when your foe is going to take the most damage since you receive healing from all sources. You can get some nice heal from your team's damage to that way.

The biggest trick with your E is to wait for the enemy to Flash. Most people will flash instantly when you start your E animation, making them get knocked back even further and escaping the gank. You can bait this out by just going in melee range, and once they Flash, keep going behind them to knock them in your desired direction. The same can be applied to Vladimir's pool.

After your first back, assuming you didn't get any kills, you should buy sheen. The next item is finishing red smite, into finishing Trinity Force and getting Cinderhulk. After Cinderhulk, to maximize your hp synergy, you should get Steraks. Trinity and Sterak buy are your biggest power spikes, and if you're snowballing, don't hesitate to take 1v2s or 1v3s. Once you have Steraks, you will be very tanky and have a lot of healing. Afterward, you should look to finish out your boots (buy them before if they have a lot of cc- mercs or a lot of ad- tabi if its mixed don't finish magical footwear at all until steraks), and look for tank items such as thornmail, spirit visage, dead mans plate, randuins omen, or even righteous glory, fitting against the enemy team comp.

I prefer running ghost instead of ignite because it helps you countergank and teamfight more easily since movespeed is a crucial stat on hecarim, it makes you run down your opponents way easier and kite them around.

The standard runes are conqueror, triumph, legend tenacity, or alacrity if they have minimal cc, last stand, magical footwear, and cosmic insight. For the stat runes, I take scaling cdr, adaptive dmg, and armor or mr fitting into the enemy team comp, but mostly armor to take less dmg from jungle clears.

Once you try out Hecarim by doing this stuff in your first few games, you will see the potential and easiness to pull out this champion to destroy soloq, and it will give you time to learn more about macro/limits instead of focusing on the mechanics of the champion.

Good Luck in soloq and may your bot lane never int again. 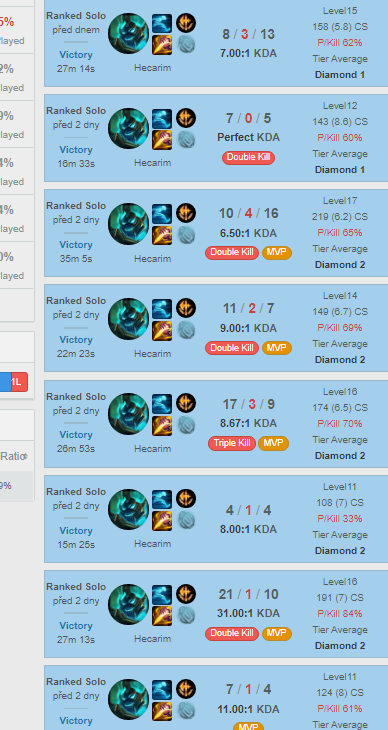 What Is LoL Boosting?

Most Famous League of Legends Eloboosters

L9 - The most famous Club in League of Legends

All Honor Rewards & How To Increase Your Honor Level in LoL

Fastest Method To Level Up Accounts In League of Legends

How To Get S In League Of Legends Every Game

All you need to know about Valorant Ranks and MMR

How to Unlock New Characters in Valorant

Everything there is to know about Valorant Agents

Valorant vs Overwatch vs Counter Strike

Scripting in League of Legends

League of Legends: Wild Rift is coming to North America in March